I just re-watched Hitchcock’s Lifeboat and it provides a really nice demonstration of the Fundamental Attribution Error. (The film has other virtues too.)

Lifeboat is the story of an American merchant marine ship sunk by a German U-Boat during WWII. A few Americans find a lifeboat and pick up a German sailor amid the wreckage. They are short on food and water and are forced to row towards safety. For days, while the Americans bicker in thirst and hunger under a hot sun, German “Willy” steadfastly pulls oar. 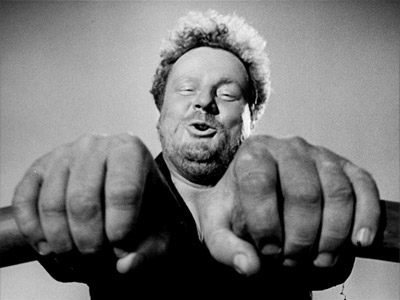 The Nazi in Question. (Image found on http://www.cineoutsider.com/reviews/bluray/l/lifeboat.html)

The Americans come to see him as a superman. One character points out the contrast: “He’s made of iron, while we’re made of flesh and blood. Hungry flesh and blood!” Willy instead credits his endurance to “clean living”.

The Fundamental Attribution Error (and more generally, The Person and the Situation) say that when we see a person acting a certain way we think it’s because of who they are or how they were born. But instead it’s usually because of what they’ve done, how they’ve trained, or the context they face (that is invisible to us). So while the Americans think Willy’s physical endurance is genetic (“they truly are the master race”) he sees the years of physical training he endured, and perhaps even the additional pressure he faces, as the one German on the boat, to prove himself.

At least this is the story for about 15 minutes of the movie. In fact Willy is cheating. He has food and water squirreled away, which is the hidden context that really accounts for the observed behavior.